In low-margin businesses, even a modest reduction in costs can make a difference, having the same effect as a significant increase in sales volume.

The Leverage Effect of Cost Reduction

The idea that even cost management is an important alternative to maximise revenue is accompanied by an interesting suggestion: in low-margin businesses, the impact of a modest reduction in costs is equivalent to a significant increase in sales volume. Let’s make a simple numerical example, so as to better understand this statement. Let’s imagine a company with a financial structure such as the one shown in the top part of our figure. 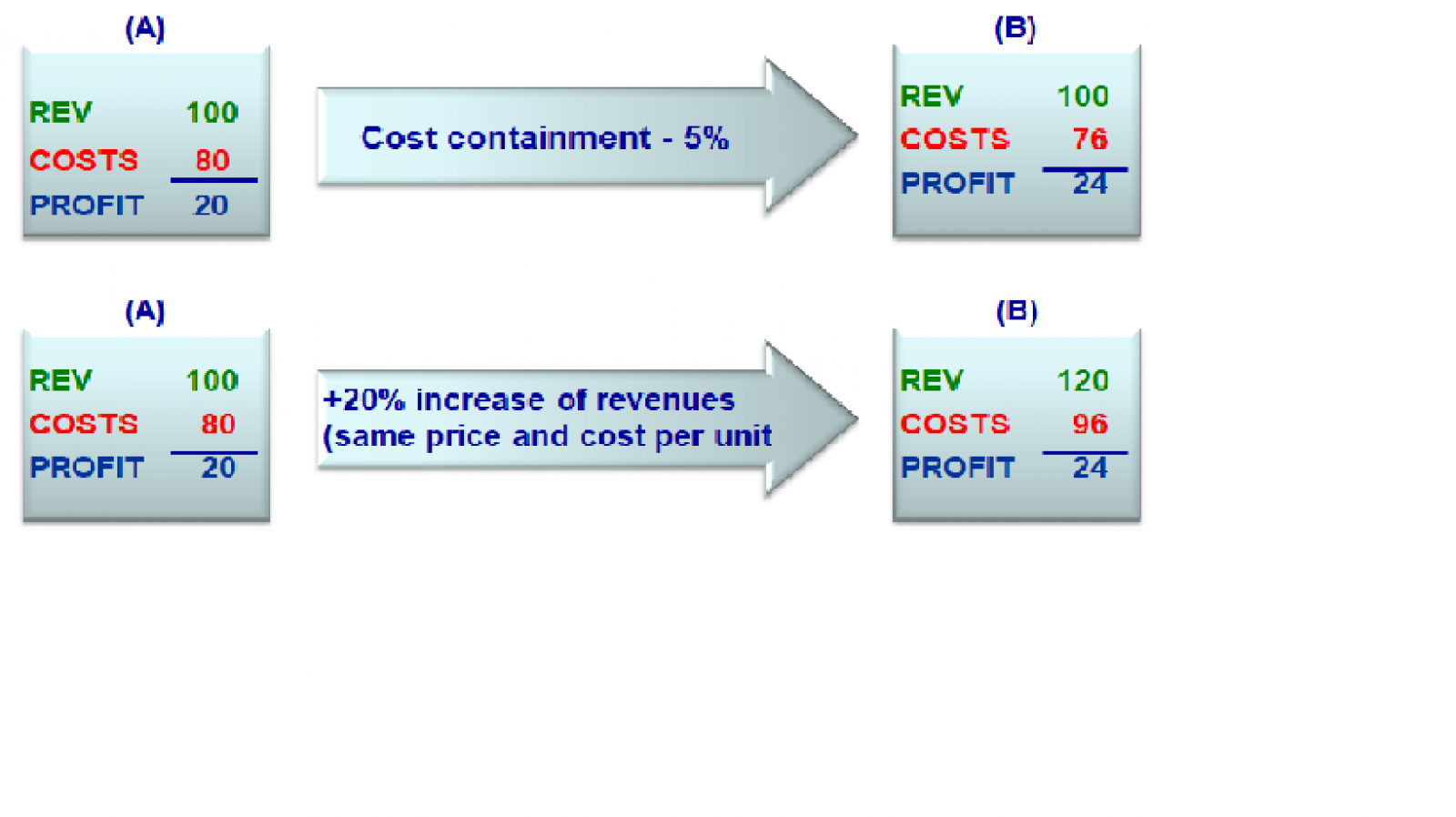 In situation A, the business’ profitability is equal to 20% of the sales volume. If we reduce costs by 5% we can obtain a new financial structure where, revenue being equal, costs would lower to 76. This means that by intervening with a 5% reduction of costs we could achieve a 20% increase in profitability, with a net profit that would go from 20 to 24 euro. To get the same result working on volume (see the lower half of the figure) we would have to increase revenue by 20%. It is clear that a cost reduction as low as 5% seems easier to attain, compared to having to increase the sales volume by 20%. Based on this we can state that, to improve financial results, cost reduction is often more effective than an increase in the business volume.

Which Conditions Ensure the Leverage Effect of Cost Reduction

Cost Containment produces a multiplying effect on the company’s financial result only if two conditions exist: the first one is that total costs must have a significant bearing on the sales volume; the second one is that the total of a company’s cost must be higher than the total contribution margin (for further details please see “Contenere i costi: una via per crescere senza rinunce” [Cost Containment: How to Grow without Sacrifices], Aielli M., 2012).

Why is it Easier to Work on Cost Reduction?

Cost reduction concentrates on in-house resources or on purveyors of factors of production who interact with them. It is thus a task that is carried out among a relatively contained number of players, who are often internal or in any case keep in touch with the company.

The leverage on volumes, on the other hand, acts on the markets, where many, often contrasting players operate (competitors, potential newcomers, clients, etc.). The advantages depend on individual behaviour, but also on complex dynamics, and thus a single company could have limited influence possibilities.

Cost reduction falls within the cost management sphere of influence, and can be a more easily managed variable than the volume leverage, which results from all the forces that come into play on the markets and can thus turn into a variable we have to cope with.

Build the best case scenario for your business

Don’t be outdone in your industry: keep an eye on cost trends and drive continuous improvement without taking time away from your staff.

The SHAPER system takes care of it: it collects data, monitors them and constantly implements improvement actions… without interruptions. The goal is to never stop innovation and your growth!

Reach out to us anytime and lets create a better future for all technology users together, forever. We are open to all types of collab offers and tons more.